Too Many SaaS Ideas? Discover How This Founder Found His Focus – with Bart Lorang [196] 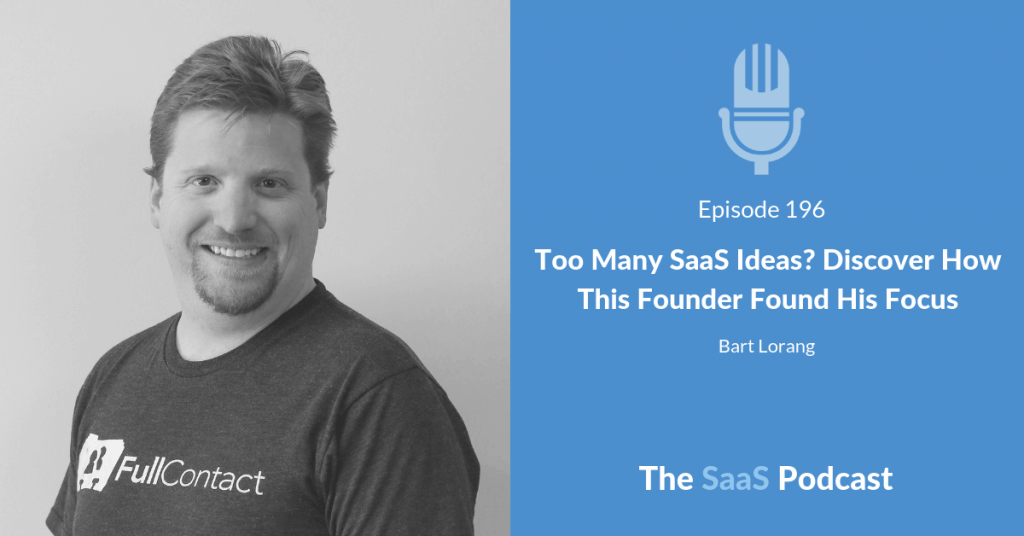 Too Many SaaS Ideas? Discover How This Founder Found His Focus

Bart Lorang is the co-founder and CEO of FullContact, a SaaS product that helps you manage your contacts and relationships better. It transforms partial contact information into complete profiles and more useful customer data.

Bart came up with the idea for his business when he looked at how well his wife organized her contacts in Outlook. And he started thinking how great it would be if he could build software to enrich his own contacts data.

He and his co-founders developed a simple tool called Rainmaker that would automatically update your Google contacts with data from social networks. They launched it in Google's Marketplace and it didn't take too long to find a few customers.

But then they did what many of us have done – they had another product idea that they were excited about, so they started working on that instead. And for many months, they pretty much ignored Rainmaker other than fixing a bug or two.

After a few months working on that second product, they had another idea for a third product. So they started working on that. Now they basically had 3 products and very little focus on what exactly they were trying to achieve.

And then one day they had a conversation that changed everything. It was when they realized that with all 3 products they were trying to solve the same problem, but in different ways – they were taking partial contacts and turning them into full contacts.

And that's when they finally committed to focusing on one product. Today their company generates 7-figures in monthly recurring revenue and has raised over $55 million in funding.

It's a great story and I'm sure you'll get a ton of great insights from this interview.