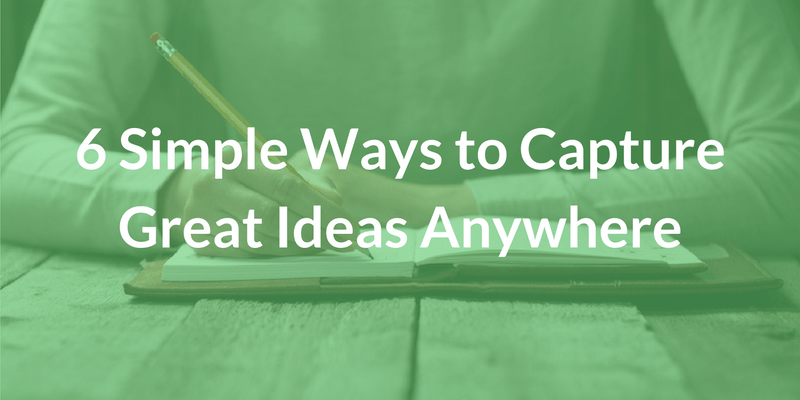 How often do you have a great idea? Probably more often than you think.

We all have lots of ideas every day. If you're like me, a lot of those ideas are terrible. Or at least they don't initially seem that wonderful.

But now and then, I have a great idea. Or the ‘terrible' idea I had last week evolves into an idea that could have some potential.

Unfortunately, most of the times, I'd have those great ideas and then forget about them. I'd do nothing with them.

Why? Because those ideas have a tendency to come up at inconvenient times e.g. in the shower or when you're going for a run. And it's inconvenient because it's never easy to capture that idea right at the moment. So you tell yourself that you'll do it later, but most of the times you forget the idea.

So it's crucial to capture your ideas as soon as you have them.

Why You Should Capture Your Ideas

There are several benefits to capturing your ideas:

1. Clear Your Headspace: firstly, it will help you clear your mind so you can focus on your business or whatever else is a priority for you at that time. If you don’t, then you’ll likely keep getting distracted by the idea while you’re trying to focus on something else.

2. Don’t Forget Those Ideas: secondly, by capturing your ideas, you won’t forget about them completely. Have you ever had that experience when you’ve thought about an idea before going to bed and decided to make a note of it in the morning? But when you wake up, you can’t remember the idea? You just remember that you had a great idea that you meant to write down.

3. Find That Winning Idea: not every idea you have will be a great one. But once in a while, you might just have the insight you need to come up with a new winning business idea. Have you ever thought of a great business idea, forgotten about it and then kicked yourself years later when you see someone who took the same idea and turned it into a successful business? When you regularly capture your ideas, you're more likely to follow through and do something about them.

4. Become an Idea Machine: and finally, the more ideas you capture, the more you’ll build the habit of generating ideas. Instead of writing down great ideas only when you have them, you could take James Altucher’s advice and start coming up with ten ideas every day.

The key to being able to capture ideas as soon as you have them is to ensure you have the right device wherever you are. It doesn’t matter if that device is a piece of paper or the latest and greatest app that you just discovered in the App Store.

Your ideal ‘capture device' should be simple, fast and easily accessible wherever you are.

Here are 6 of my favorites ways to capture your ideas anywhere:

The easiest and fastest way to capture great ideas is with good old paper and pen. It's simple, fast and you never runs out of battery. And personally, I think there's still something magical in this digital world to writing down on paper.

Here are some of my favorite ways of capturing ideas on paper:

If you're not already familiar with them, Moleskine is an Italian company that produces premium notebooks based on iconic handmade journals available in Paris around the late 19th century. The company has grown into a global brand and in 2015 generated over $136 million in annual revenue. 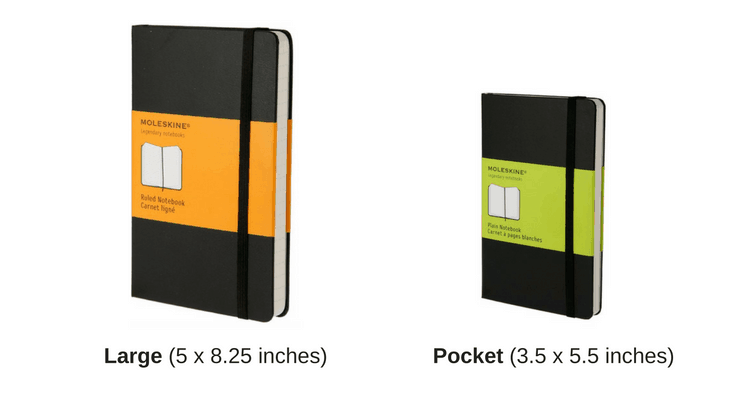 I've used Moleskine notebooks for years and still love them. I always carry a large Moleskine Classic Large Notebook in my computer bag and often will put my computer away and write in my notebook instead.

I also use a Moleskine Classic Pocket Notebook from time to time. It's convenient when I just want to carry something in my pocket and still enjoy the experience of writing in a quality notebook. 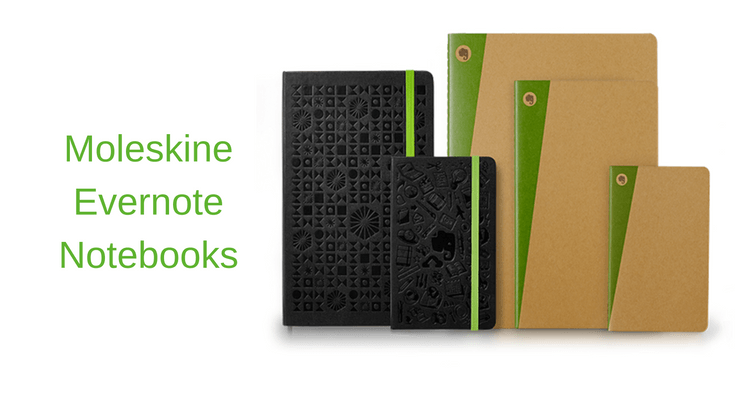 If having analog notes makes you nervous, then you might want to consider the Moleskine Evernote Business Notebook. This is a variation of the classic notebook but is optimized for Evernote's Page Camera feature so that you can digitize pages with your smartphone or tablet.

The Mod Notebook takes the concept of combining analog notes with digital notes even further. You use the notebook as you would any other paper notebook. But once it's full, you send the notebook to Mod who will scan and digitize every page for free. And you can access your notebook from the cloud using their app or sync all your pages to Dropbox, Evernote or OneNote.

Another great portable capture device is the Dialed Notebook Wallet. This is a well-designed wallet which gives you enough space for a few credit cards, cash, stylus pen, and notebook. 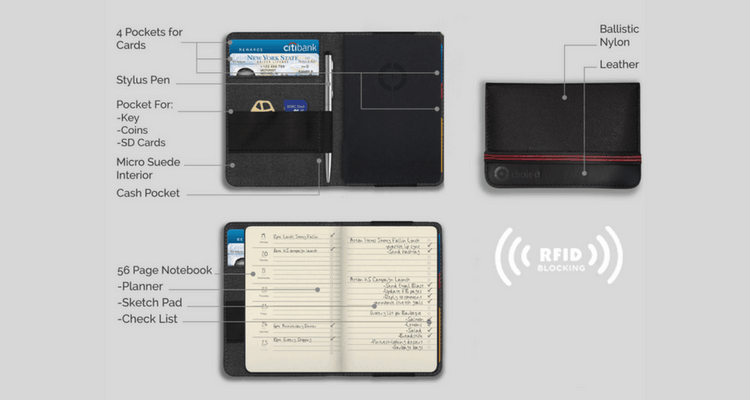 It's a great way to combine your wallet and portable notebook into one.

Just make sure that you don't get carried away and put too much in there like George Costanza:

5. Do It YourSelf (DIY) Notebook

And finally, if you don't want to get one of those ‘fancy' devices, then you can grab a piece of paper and make your own ‘minimalist notebook.'

It's easy, cheap and just as effective as capturing all those ideas.

And of course, no notebook would be complete without something to write with.

I love the Fisher Space Bullet Pen. It's small, portable and will write at any angle – even in ‘zero gravity'! When closed, it's about 3.5 inches long and easily fits in my pocket. In fact, most of the time I don't even notice that it's there. 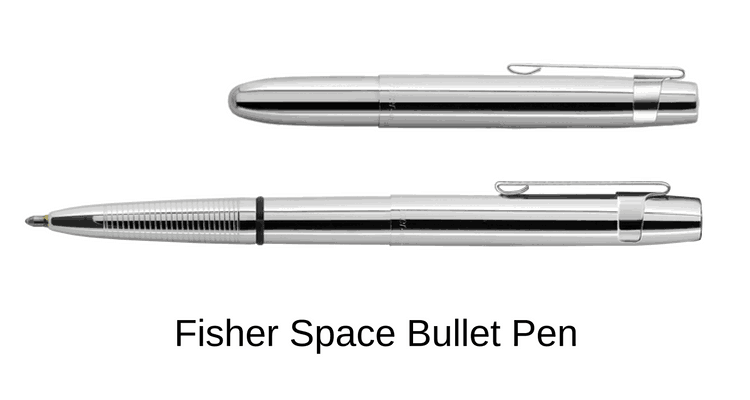 An alternative is the Pilot G2 Pixie pen. It's not as versatile as the Fisher Space Bullet Pen, but it's a lot cheaper. But is still small enough to keep in your pocket all the time and is great to write with.

In addition to using ‘analog' notebooks, I also love taking notes on my iPhone. Sometimes you just don't want to get a paper and pen out, or it's just easier to capture on your smartphone e.g. when you're standing in line at the grocery store.

There are plenty of note apps out there, and you may already have your favorite. But if you're still looking for one, then I'd recommend one of the following apps. Both of them have iOS and Android versions.

In addition to being easy to use, these apps also sync your notes to the cloud. So you can access your notes from any device, and your data is safely backed up. 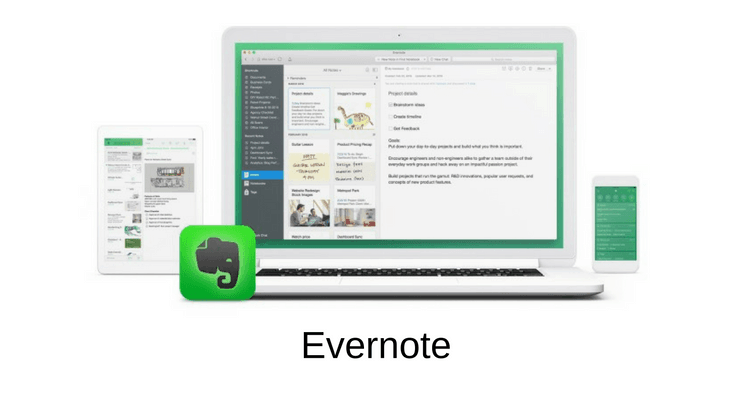 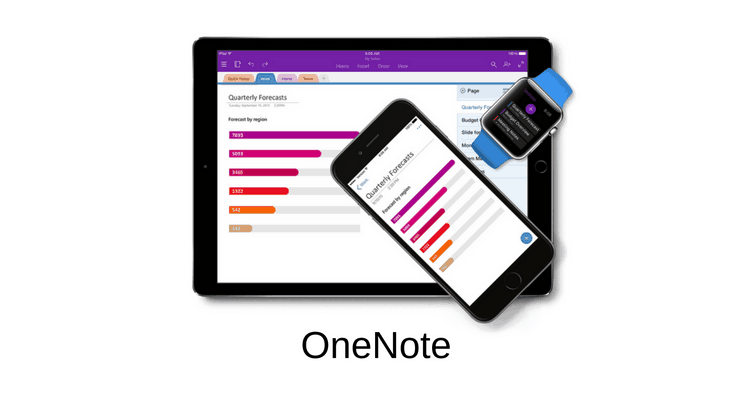 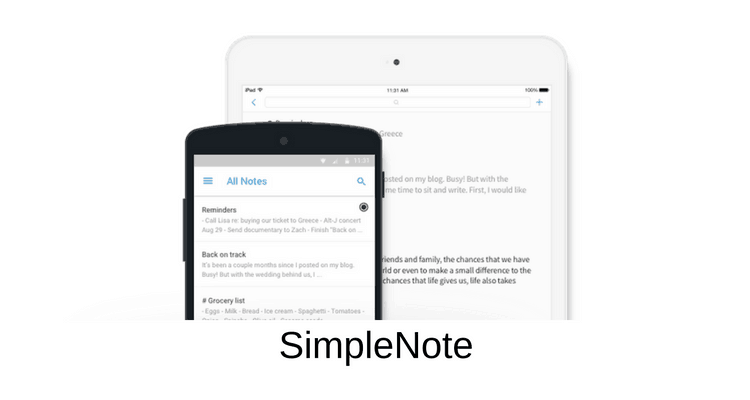 All of these apps are great, but they have their strengths and weaknesses. The best way to find the right one for you is to download all 3 of them (they're all free) and try them out. You'll soon enough gravitate towards one of them. 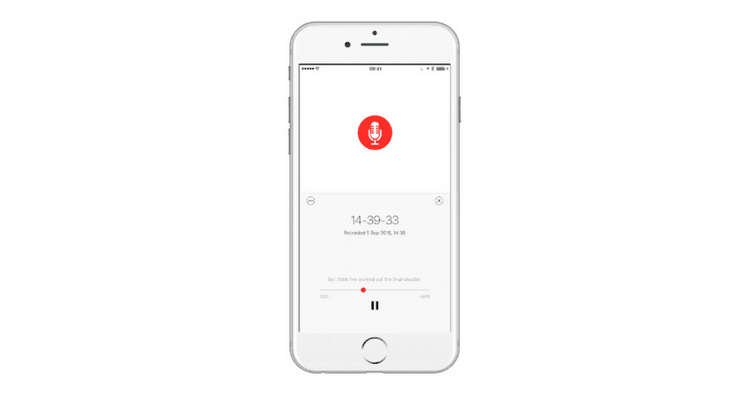 It's not always convenient or easy to type on your smartphone. In those situations, it's handy to be able to capture your idea by recording your voice quickly.

There are tons of apps available for both iOS and Android. But if you've already decided that you're going to use Evernote or OneNote, then you'll be pleased to know that you can also use those apps to record voice notes.

If you want to use a dedicated voice recorder app instead, which often has better features designed for voice input, then check out this article about the best iOS apps or this one for the best Android apps. 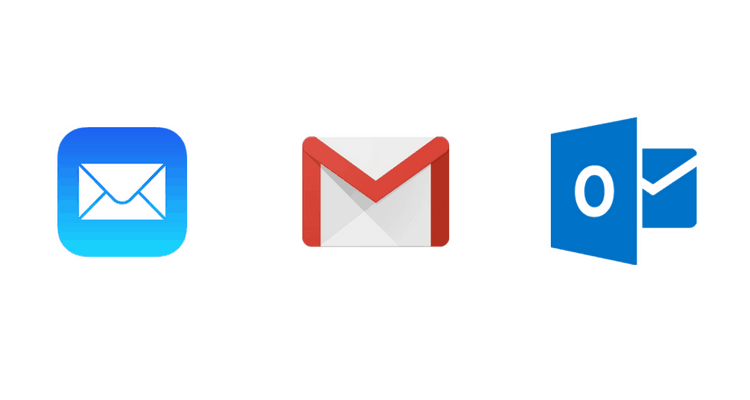 Having note and voice recording apps is great. But sometimes it's much simpler and faster to capture your idea with an app that you're already using. And for many of us, that's going to the email app.

You might already be doing this. But if you're not, then try it out. The next time you have an idea, just email yourself. 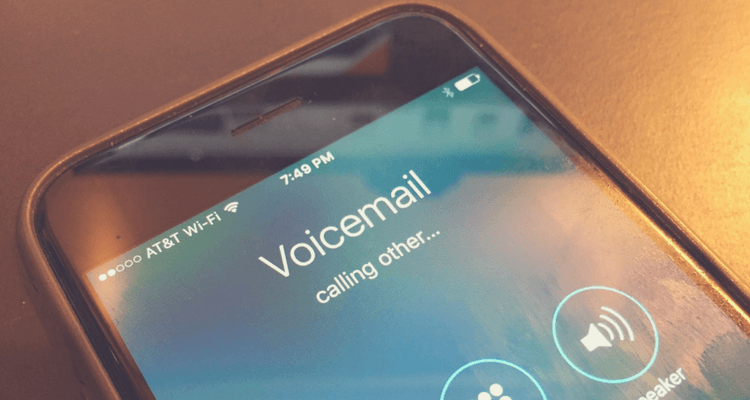 Just call yourself and leave a voicemail. It may seem a little ‘old fashioned' these days, but it's still an easy and reliable method for capturing ideas. With all the other options that we've discussed, it probably wouldn't make sense to call yourself when you have your smartphone with you.

But let's say that your phone is out of battery or you left it at home. Just borrow a friends phone and leave yourself a voicemail. 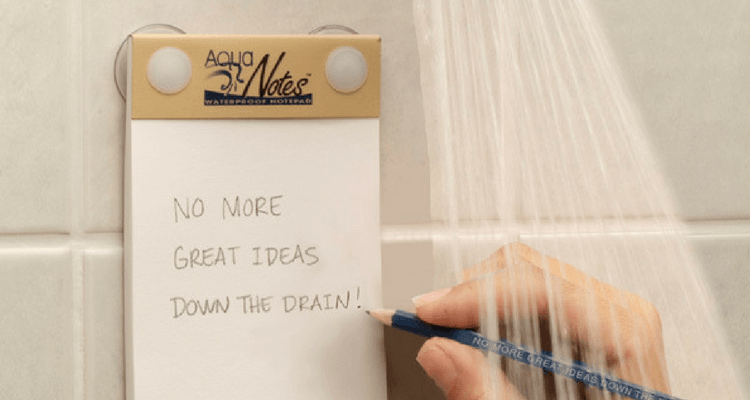 Where do you have your best ideas? I've had some of my best ideas in the shower.

And I just say to myself that I'll write that idea down when I grab my notebook or phone. But quite often, I've forgotten the idea by then.

Aqua Notes gives you a convenient method to capture your ideas when you're still in the shower. It comes with a 40-sheet waterproof notepad, a pencil, and suction cups to mount your notepad and pencil on your shower wall.

This final recommendation might seem a bit geeky, but it could help you capture that million dollar idea one day!

How These Devices Won't Help You

No matter which ‘device' or method you choose to capture great ideas, they won't help you if you don't use them. It might take some time to build the habit, but you need to get used to capturing the idea as soon as you have it. Sometimes, the idea might seem a bit lame, and you'll be tempted not to bother with it. But ideas don't always show up in their ‘final form' and sometimes what initially seems like a bad idea, could later become an amazing one.

Question: What's your favorite device or method for capturing ideas?