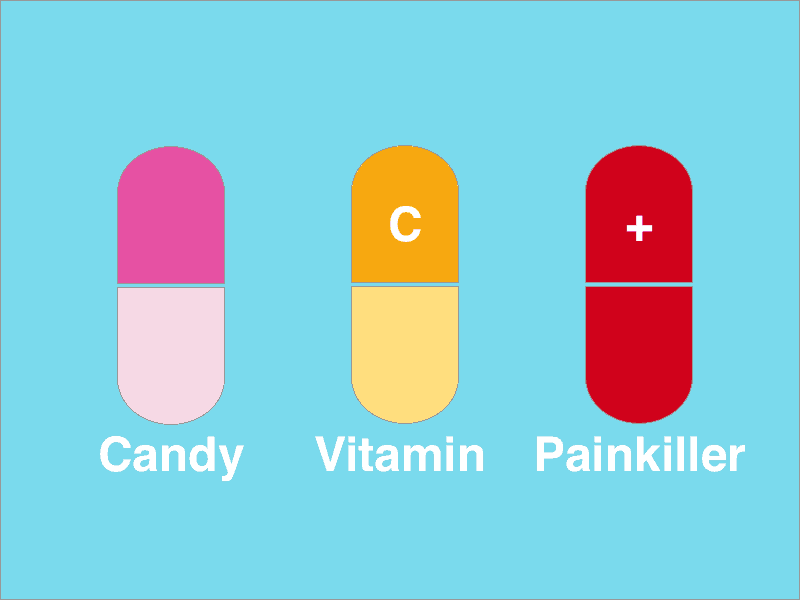 Candy, Vitamin or Painkiller: Which One Is Your Product?

Everyone in the room seemed to be excited – except for me.

The engineering team had just watched a presentation on a proposed plan to add new features to our product. And everyone seemed ready to get to work building those new features.

I could see why everyone in the room was so excited. It was a tough technical challenge. It would allow the engineers to flex their development muscles. And it would impress their peers and senior management.

But I couldn’t help wondering — would our users even care?

“What problem are we trying to solve for our users?” I asked.

Silence. There were blank stares around the room. Eventually, the presenter gave a vague answer about ‘making life easier for our users’.

Fast forward six months. The team went ahead with the plan. The new features shipped but never got any traction. And they were quickly forgotten.

That’s a nice way of saying that the plan failed miserably.

These were incredibly smart and talented people. So what went wrong?

It’s because the ‘cool’ idea was a vitamin, not a painkiller. Most of our users didn’t care about it and could happily get by without it.

I'm sure you've heard people talk about vitamins vs. painkillers. It probably isn't a new concept for you. We should always build painkillers, right?

Well, I don’t think it’s simple as that. Let me explain why.

Candies, Vitamins and Painkillers Oh My!

Where did this idea of vitamin vs. painkiller in the product world come from?

I did some digging and traced this back to Kevin Fong , a venture capitalist in the Bay Area. I don’t know if Kevin coined the idea or not, but let’s roll with that assumption.

Here’s what he was known for saying:

So now we have three possible categories: candy, vitamins, and painkillers.

So let’s talk about each of these and explore them in more detail.

Candy That Generates $1.5 Million a Day

We all enjoy candy from time to time. Some of us enjoy it more often than others.

Candy is sugary and sweet. It calls to us as we walk down the grocery store aisle. We feel better when we have some, but we try not to make it a habit.

It would seem that if your product is ‘candy’ then it’s something that people can live without. They may even consider it bad for them in the long-term.

It seems to make sense that we shouldn’t build products that are candy.

But is that true?

I’d argue that most video games are candy. But there’s a hugely successful gaming industry which was built around serving up this candy day after day.

For example, the mobile game Clash of Clans, generated $1.5 million in revenue every day in 2015. I don’t think anyone would call Clash of Clans a ‘painkiller'. It’s pleasurable and fun.

That’s our first clue. Sometimes you can build a successful product by giving people pleasure. It doesn’t always have to be a painkiller.

Candy is not always bad. Especially if you’re the one selling the really good stuff.

Vitamins Can Be Painkillers Too

A vitamin is your ‘cool’ idea. It makes things better for people but isn’t always essential.

Most of us know that we should get enough vitamins, either through the food we eat or from supplements. But we don’t always do something about it.

A vitamin is important, but it’s not urgent. If you don’t get enough vitamins this week, this month or even this year, you may not notice the effects.

You may just think you’re tired and that you need more sleep or coffee.

If your product is a vitamin, then can be hard to sell it. People will tell you things like “I think that’s a great idea” or “I could totally see myself using that”.

And then they’ll get on with their lives and forget about your product.

But vitamins can become painkillers.

For example, who would have considered Twitter to be a painkiller when it launched in 2006? At best, it was a vitamin that helped people communicate more easily. For others, it was just candy.

Today, there’s no doubt that Twitter has become a painkiller for many people. It was used by researchers to predict flu outbreaks and it was critical during the Egyptian revolution of 2011.

So we can’t ignore vitamins. Because tomorrow they may become painkillers.

A painkiller, on the other hand, solves a painful problem.

Yeah, I know I’m a genius. But seriously, as obvious as that sounds – it’s an important point to make.

It makes things better for people by taking away their pain.

If you’re in pain, then you can’t live without a painkiller. You need it now. You’re not going to waste time researching, doing price comparisons, etc.

You’re going to get your credit card out and get rid of that pain as quick as possible.

If your product is a painkiller, then you’re going to find it much easier to sell it. In fact, you probably won’t have to put much effort into ‘selling’.

It’s a simple conversation: “you have a pain, and our product takes that away”.

But what if your product solves their pain forever. They don’t need your product again. So that’s probably not going to be a great business.

Is it any surprise that the pharmaceutical industry generates a trillion dollars in annual revenue? They have no incentive to create a product that fixes your pain for good. They want you to keep paying for their products over and over again.

Have you ever tried Unroll.me? It’s a great product. Just enter your email and it makes it super-easy to unsubscribe to all those email lists you’re on.

It solved a pain for me once. But after I was unsubscribed from all those lists, I didn’t have a need to keep going back to use Unroll.me, let alone pay for it.

So there’s our next clue. Having a product that’s addictive is probably more important than whether it’s candy, vitamin or painkiller.

Does It Matter Which One Your Product Is?

You can build a successful product with candy, vitamins or painkillers. There are tons of examples of real companies who’ve done just that.

But I think it’s also possible for a product to be candy, vitamin and painkiller at the same time for different people

Let’s take a look at Facebook. Is that candy, vitamin or painkiller?

The correct answer will depend on who you ask.

For the guy in his twenties who’s bored at his job and counting the minutes to 5 pm every day, then Facebook is probably candy. It helps him pass the time.

For the working mom who wants to stay in touch with friends and family, share photos and celebrate events, it’s probably a vitamin. It’s nice, but not critical.

For the widowed grandmother who lives alone and is desperate to connect with her children and grandchildren living abroad, it’s probably a painkiller.

So I think better questions to ask about your product are:

Bottom line — you don’t always have to offer a painkiller. Obviously, having an addictive painkiller will probably increase your chances of success.

Whatever you have, be honest with yourself. There’s no point deluding yourself that everyone’s going to love your ‘cool’ idea.

And the sooner you discover that, the better.