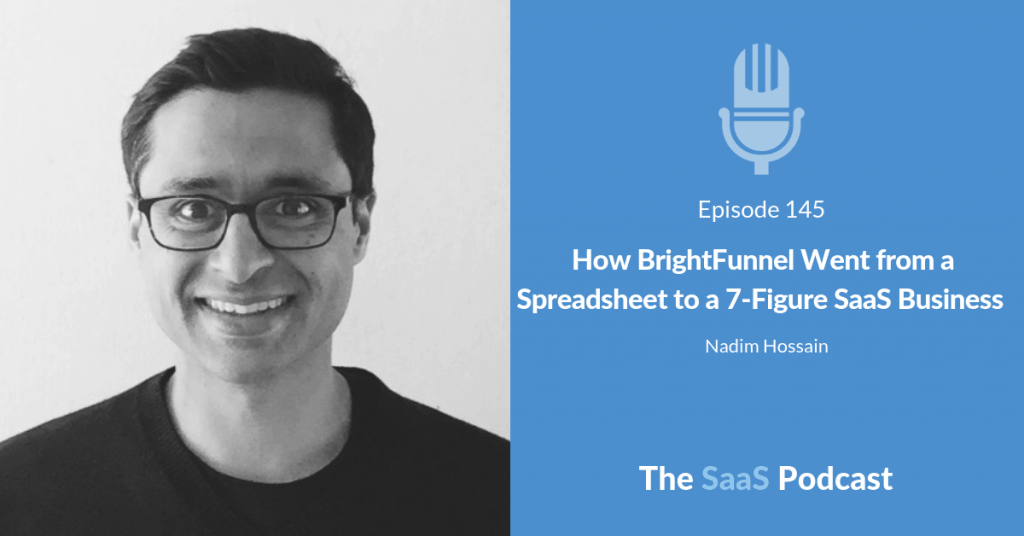 Nadim Hossain is the founder and Executive Chairman of BrightFunnel, a SaaS product that generates predictive and actionable insights for B2B marketers, and shows what impact marketing is having on revenue.

Founded in 2012, BrightFunnel has raised just under $9 million in funding to date. And its customers include companies such as Verizon and Cloudera.

My guest has over 17 years of experience in building, marketing, and selling cloud applications. Prior to founding BrightFunnel, he was VP of marketing and sales at PowerReviews which had a $170 million exit. And he was also a product marketing executive at Salesforce.com during their hyper-growth years.

This is a story about a marketing guy who was working at a tech company. He was frustrated about hard it was to understand the impact that marketing was having on revenue. He started creating his own solution by gathering data from different sources and putting it all into Excel spreadsheets. And he thought to himself, someone should really find a good solution for this.

Eventually, he realized that he was the one who needed to solve this problem. But he wasn't a developer so needed to find the right technical co-founder. He was also a first-time founder and was trying to build this business while he and his wife were expecting a baby. So there was a lot of pressure on him and a huge sense of urgency.

Fast forward to today, he's grown his startup into a company that's generating several million dollars in revenue. He's raised just under $9 million in funding to date. And his company now employs 35 people and that number is likely to double in the next year.

He shares some great insights both from the early days of turning his idea into a business. And we also explore lessons he's learned as his role as a CEO continues to grow.